In recent years, the California legislature has found some success in facilitating the development of small-scale housing, particularly accessory dwelling units (ADUs), even as legislation focused on encouraging larger-scale development has faltered. The result has been a significant increase in the uptake of ADUs across the state. To build upon these gains, the 2021 legislature is looking to build upon the progress made in facilitating smaller, less controversial housing development. Senate Bill 478 by Senator Scott Wiener of San Francisco is one piece of these efforts. This bill, known as the Housing Opportunity Act, aims to ensure that overly restrictive land use requirements do not stymie the production of small-scale development where it would otherwise be legal based on zoned density. This is an important topic because of the increasing prominence of various  bills introduced at the state level that would compel or encourage localities to zone for “missing middle” housing, which refers to lower-density housing of  10 or fewer units. SB 478 proposes two specific statewide policy changes: establishing a minimum floor area ratio (FAR) that cities could impose on all land zoned for two to ten residential units, and establishing minimum lot sizes for parcels that are 2-4 units and for parcels that are 5-10 units.

Could the changes proposed in SB 478 catalyze more missing middle housing? And how many cities would be impacted by these reforms? This analysis examines the extent to which policies such as those set forward in SB 478 may be impactful by examining FAR and minimum lot size requirements statewide. To do this, we utilized our 2019 Terner Center California Residential Land Use Survey (TCRLUS). The survey, conducted in 2017 and 2018, includes responses from 252 cities and 19 unincorporated county areas in the state, and includes insights on a range of questions on local zoning, development approval processes, affordable housing policies, and rental regulations.1

In addition to the TCRLUS, we also examined literature on the impacts of restrictive land use requirements, including FAR and minimum lot sizes.

Literature shows that restrictive land use requirements—such as low FARs and high minimum lot sizes—limit new housing development and correlate with other negative housing outcomes. A 2019 study of zoning laws and housing conditions in California cities found that the share of land zoned for single-family housing and more restrictive minimum lot size requirements predicted higher housing costs (measured in terms of median gross rents and median home values) compared to other jurisdictions in the same metropolitan area. Municipalities that enforce low-density zoning through stringent minimum lot size requirements were less likely to be home to Black and Latinx communities and blue-collar workers.2 Research from the Mercatus Center used data from the TCRLUS (which includes minimum lot size and FAR requirements) to measure regulatory stringency in housing development, and found that more regulation is associated with slower housing growth. High regulatory stringency and slower housing growth were even more strongly and significantly correlated when the supply growth was adjusted for existing density and growth in demand.3 Large minimum lot sizes have been shown to have a positive, statistically significant effect on housing prices.4 These requirements also raise the cost of construction and thus cause a decline in the supply of housing.5 A study of Bay Area municipalities demonstrated that establishing large minimum lot size requirements increased the cost of housing, with these additional costs being borne by citizens.6 FAR has also been linked to housing costs. As these requirements limit the height of buildings, restrictions on FAR have been theorized to cause cities to expand outwards to accommodate new residents. This increases both the price of housing and average commute time for residents of cities with such restrictions.7

As currently drafted, SB 478 would restrict the FAR and minimum lot size standards that a city could impose on certain parcels. For FAR, the bill prohibits a city from imposing a residential FAR lower than 1.5 for any parcel zoned for two to ten units. SB 478 would also create a new minimum lot size standard for parcels zoned for between two and four units as well as a separate standard for parcels zoned for between five and ten units. These standards have yet to be determined in the legislation and may be included in the bill at a later date.

While most cities do not use FAR to control building size for residential development, the 1.5 FAR standard in SB 478 would exceed the current residential multifamily FAR in 85% of localities.

In our survey sample of over 250 cities and counties, only 53 reported FAR standards for multifamily development. This is most likely because these jurisdictions use other methods to dictate the size of buildings that are built in residential areas, such as setbacks, height, and density. However, the 1.5 FAR standard proposed in SB 478 would be potentially very significant in the majority of cities that do use FAR as a residential development standard, based on the responses we received in the TCRLUS.

In cities that do impose a FAR for multifamily residential, a strong majority would be impacted by the proposed 1.5 FAR standard (Table 1). Nearly 70% of respondents reported an FAR between .26 and 1, with only seven localities reporting FARs between 1.01 and 1.5. Just eight localities reported having an FAR above 1.5, the minimum threshold in SB 478. Single-family FAR utilization was slightly higher, with 77 respondents reporting use of FAR on this housing type (Table 2). Of these jurisdictions, 71.4 percent of localities reported single-family FARs between .26 and .5.

A strong majority of cities require minimum lot sizes greater than 2,500 square feet for both single-family and multifamily projects.

As opposed to FAR, minimum lot sizes are common standards used for residential development, and a majority of localities set their standards higher than 2,500 square feet. 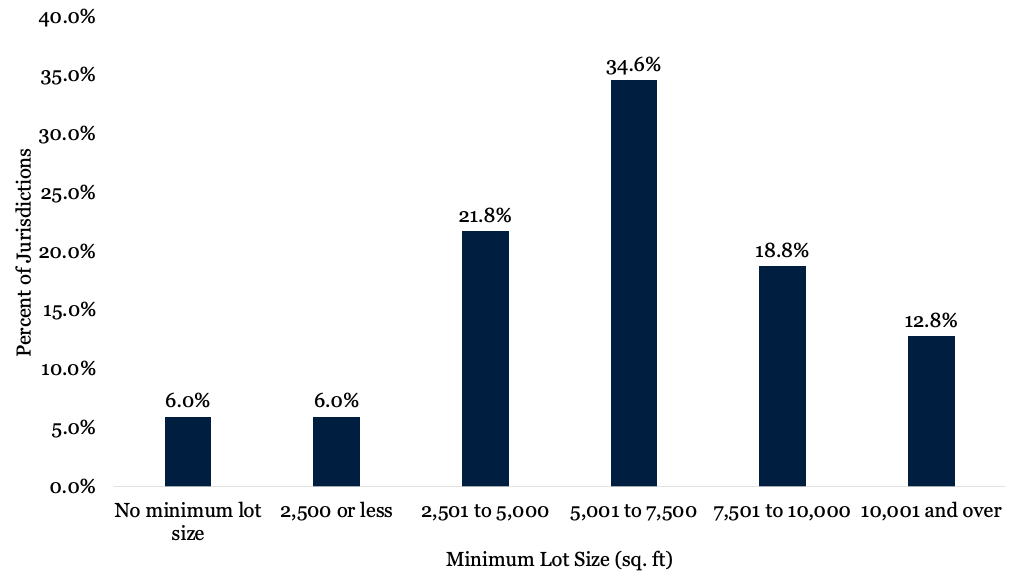 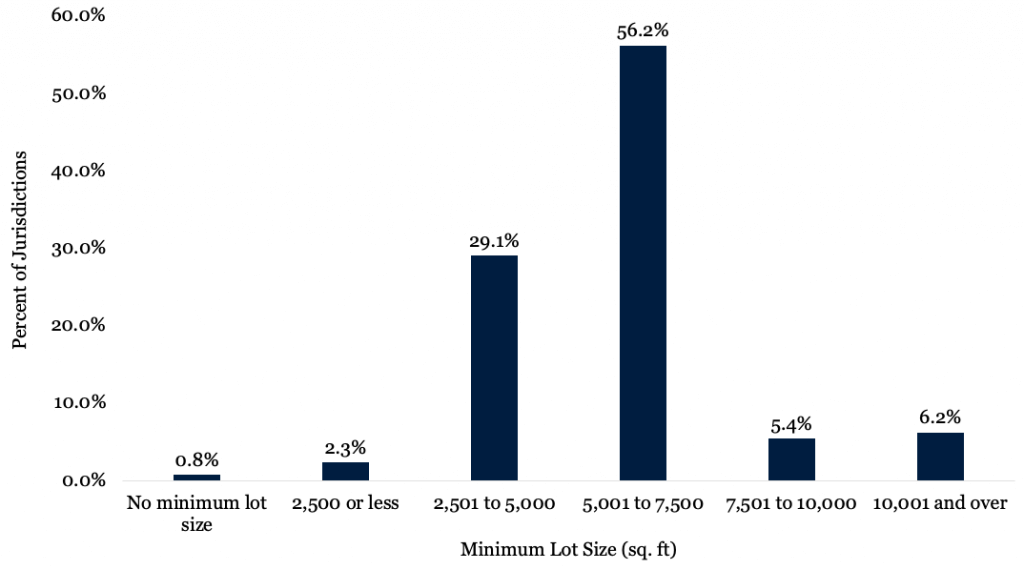 The provisions proposed in SB 478 would significantly alter the FAR and minimum lot size requirements that most California jurisdictions impose on new, small-scale residential development. This could have important implications for the creation of “missing middle” housing by allowing more flexibility in the size and shape of new small-scale development, as well as expanding where in a city such housing could be built. However, it should also be noted that jurisdictions do not rely on FAR and minimum lot size alone to limit the size and type of new residential development. Requirements dictating setbacks, height, density, roof pitch, and parking, to name a few, all impact new housing feasibility, particularly for smaller-scale development. While SB 478 will limit some restrictive land use requirements, these other restrictions may continue to limit what may be built and there is a possibility that some cities may tighten these restrictions in order to offset reforms at the state level.