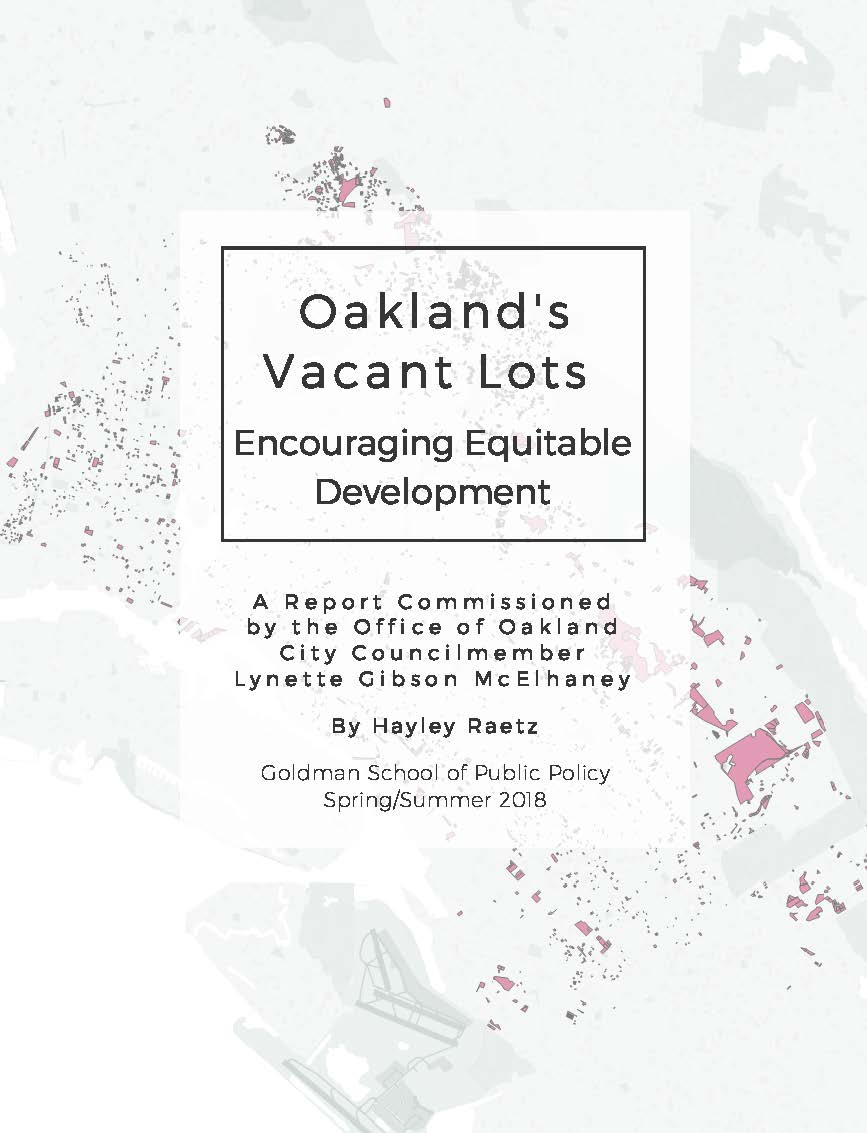 A Professional Report submitted in partial satisfaction of the requirements for the degree of Master of Public Policy in the Goldman School of Public Policy of the University of California, Berkeley, May 2018. The full report is available here.

As property values skyrocket in Oakland, vacant parcels remain scattered throughout the City’s neighborhoods and industrial areas. In order to define the extent of the problem, this paper uses public and agency data to identify, map, and characterize the vacant parcels in Oakland. This data was then used to analyze two policy approaches to move more parcels into development: one a proposed vacant parcel tax, and the other a program streamlining permitting and lowering impact fees for vacant residential parcels. The author considers the measures’ relative efficiency as well as their impact on equity concerns.

Despite Oakland’s high demand for housing, vacant parcels remain abundant throughout the city.

In the midst of a housing crisis fueled, in part, by lagging housing supply, vacant parcels represent part of the problem, as well as one part of potential solutions.

The Terner Center was recently invited to speak on a panel at SPUR to present and discuss my research mapping thousands of privately-owned vacant parcels in Oakland. Despite the city’s economic recovery since the recession, these parcels, typically empty except for grass or a paved surface, stubbornly persist throughout the city. When left in disorder, vacant parcels can negatively affect Oakland’s community, lowering quality of life,(1)  health outcomes,(2)(3)(4) and home values.(5)(6) If developed, vacant land could serve as prime real estate for much-needed new housing. New developments would also increase Oakland’s property tax revenue, bolstering vital public services.

According to interviews with developers, brokers, and land use experts, parcels remain vacant for a number of reasons:

Vacant parcels are typically small, and are often located in residential neighborhoods.

An analysis of Alameda County Tax Assessor data reveals about 4,000 vacant, privately-owned parcels currently sitting unused across the city of Oakland. These parcels are typically small in size and located in residential neighborhood areas. City Council District 3 has the second highest number of parcels, normalized by the total number of parcels in the district. Close to five percent of both Community District 3 and 4’s privately-owned parcels are vacant.

Unlocking vacant parcels should be a policy priority for Oakland.

In order to meet future demand, the city needs to permit 7,530 more units by 2023,(7) including 1,072 units affordable for households earning more than 120% of Area Median Income (AMI) and 2,804 units for households earning between 81% and 120% of AMI.(8) If an average of two units were built on each of the vacant parcels zoned for four units or less, Oakland would add close to 5,800 new residences. Oakland’s vacant parcels could accommodate a significant number of new housing units and increase tax revenue.

This past spring, Oakland City Councilmember Rebecca Kaplan proposed a special parcel tax on vacant properties. The proposed ordinance would tax parcels that are deemed vacant, a designation that includes both the vacant parcels described above as well as parcels with empty residential or nonresidential structures.(9) If approved by Oakland voters, the tax could act as a deterrent for speculation, and encourage owners of vacant parcels to sell or develop their land, ideally unlocking sites for housing. Whether or not the special parcel tax is approved, vacant parcels represent an untapped asset for the city, and Oakland should continue to investigate policy proposals that incentivize better use of empty land.

(5) Mikelbank, B. (2008). “Spatial Analysis of the Impact of Vacant, Abandoned, and Foreclosed Properties,” Federal Reserve Bank of Cleveland. 11. Retrieved from: https://www.clevelandfed.org/newsroom-and-events/publications/special-reports/sr-200811-spatial-analysis-of-impact-of-vacant-abandoned-foreclosed-properties.aspx